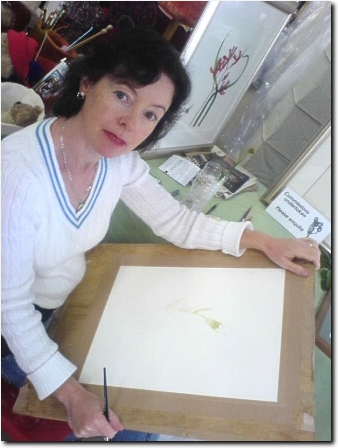 Paula Church was born in Athlone, County Westmeath, Ireland. She gained a degree in fine art at Brighton Polytechnic and she entered works in various exhibitions in England before emigrating to Australia in 1996. Although traditionally a botanical artist, she also began to paint native birds in with a view to represent some of Australia’s most iconic birdlife.

Along with practicing traditional natural art Paula is also a heraldic artist, painting coats of arms and other insignia. Her commissions include insignias for two 1910 Rolls Royce cars and the gilding and painting of a yacht. However Paula’s most notable commission to date involved painting eight coats of arms and five insignia onto the Diamond Jubilee State Coach, which was presented to Her Majesty the Queen.

Paula likes to incorporate three bees into her paintings, an old heraldic symbol representing industriousness. She also occasionally hides a small map of Australia in paintings.